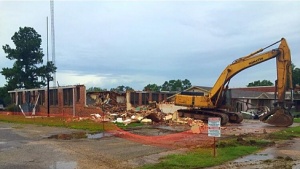 Change is never easy. Good-byes are always difficult. We want the things that mean the most to us to remain unchanged from the time of our fondest memories of them. For many of us who grew up in Grand Saline, Texas, one of those things that we have hoped would never change or go away is the old elementary school. Four generations of students attended school in that building, and four generations of students have (mostly) fond memories. There were many people who hoped to salvage it for some purpose after the new school was constructed and it was abandoned. There was talk of an adult learning center, a community center, a fine arts center. . .unfortunately, though, the money to make the necessary renovations to the building is just not there. Demolition on the old elementary school began yesterday, and in short order, the building will only be a memory. As much as I hate to see it go, having been in the building after it was emptied, and having seen many of its flaws which had gone unnoticed by most when it was full of students and teachers, I think this is for the best. I wrote about some of those memories a while back and posted it here on my blog, but I thought I’d share just a couple more today.

Even after I was in high school, I still made my way down the hill from time to time. Each fall the band boosters held the Harvest Festival. We used the auditorium for the queens pageant, the gym and playground for the festival itself, and, the best part for us students. . .turning the cafeteria into a haunted house! We would all meet up at the cafeteria early on the morning of the festival, hang black tarps to make the maze, and then go to work on the ghoulish vignettes laid out to scare the pants off our guests–or, at least make them scream and laugh a little. Then, the next morning we were back at it, cleaning up all of the fake blood, guts, cob webs, cauldrons, and whatever else we found to cram in there. Later in the year, the band would come down and put on a special concert for the fifth graders in an effort to encourage them to take band in middle school. (That’s not always easy in a football town.) For some reason–we all know why–when the concert was over, we wanted to walk those halls and poke our head’s into our old classrooms and say hello to our former teachers. I think we probably made a quick trip over the monkey bars and down the slide as we walked back up to the high school. It was just that special. 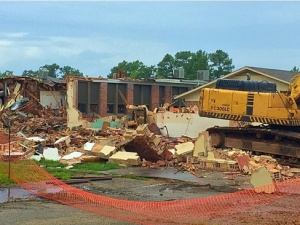 The East wing of the old Grand Saline Elementary School is first to go during demolition. 8/16/2016

Years later, I would revisit those halls as an uncle, proudly watching his nieces at their Kindergarten Graduations, Christmas programs, awards ceremonies, special lunches, and other events of that nature. By that time, I was well into my thirties and hadn’t been a student there in over 20 years, but I still wanted to walk those halls, look into my old classrooms, and say hello to former teachers. When I went to work for the school in 2010 I had a couple of occasions to head down the hill and take something to Mrs. Sewell in the library, and each time I walked through the doors and down those halls with the creaking hardwood floors, I was reminded of just what a special place that school building was.

The last time I was in the building was in late 2012, after the new elementary school opened, but while the technology office was still in the old building. It was during that time that the nostalgia became tinged with sadness. When the building was full of people it was full of life, and things didn’t appear to be in such bad shape. During that time, though, when it was empty except for our office and the remaining bits and pieces that weren’t carried to the new school, I saw just how bad things really were. Suddenly, as if by magic, cracks appeared in the walls, ceiling tiles sagged, doors became difficult to open and close. I’m sure all these things were there before, but they went unnoticed except by the people who needed to notice them and make the hard decisions about what to do with the building. By then it was over 60 years old. . .something had to be done.

Now, the really hard decision has been made. Despite the optimism of our best hopes, I think that somewhere in the back of our minds we all knew this day would come. We all know that buildings can’t stand empty forever. They become eyesores, or worse, they become dangerously tempting targets for mischievous kids or malicious adults. The cost to renovate and the risk of leaving it alone are just too high, and regrettably, but necessarily, the time has come to say good-bye to this iconic landmark in our hometown. 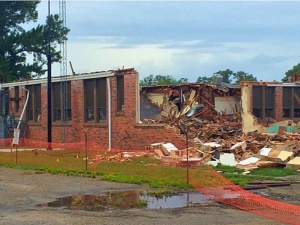 The East wing of the old Grand Saline Elementary School is first to go during demolition. 8/16/2016

But, in all of our tears and heartache, we can take comfort in two things: first, that right up until its last day, that old building still looked the same as we remember it looking on all our first days of school; and, second, that in our memories it will always look the same, and it will always be the same. Long after that lot is empty and grass has covered over the scarred earth, those memories will never change.

Good-bye, old friend. You are already and forever missed. 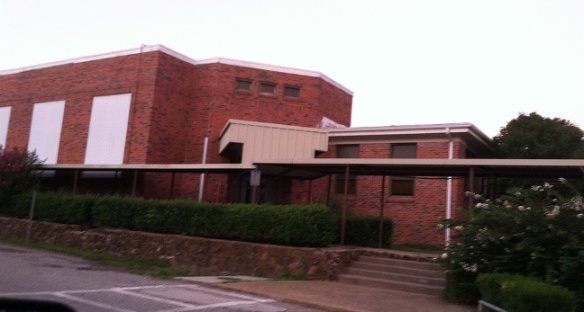 The main entrance of the old Grand Saline Elementary School which was closed in 2012 after over 60 years in service. Demolition on the landmark began on August 16, 2016.