This essay is a little different from my regular “Hometown” pieces as it focuses mostly on personal memories of my family’s old homeplace in Grand Saline. But, I included it in this series because, like us, so many people in town back in those days were also Front Porch People. If this story brings back memories for you, please do share them in the comments section on the blog.

There was something about sitting on our front porch during the late afternoon and evening, especially during the spring and summer, that I just couldn’t get enough of. If I was alone, I’d stretch out on the smooth concrete–no matter how hot it had been, the concrete slab was as cool as if it had never seen the light of day. Those moments never lasted long, though. As soon as my grandmother or aunt caught me lying there “for the world to see” (as they would say), I was admonished to “sit up straight” lest somebody drive by and see me “all wallered out there like some kind of lump.” I never really understood why it was so important to them that nobody ever saw me lying on the front porch, but it was, so I did as I was told. I sat up, leaned back with the palms of my hands flat–sometimes, if I felt really daring, I would lean back on my elbows…maybe they wouldn’t check up on me again. Until I was in sixth or seventh grade, and had gotten too big for them to hold me, I would sit in one of the two metal chairs that sat on the right side of the porch under my grandmother’s bedroom window. They were often even cooler than the concrete, but those sits usually didn’t last long. Mammy or Sister would open the screen door, step out on the porch, look at me–“you’re in my chair,” they’d say–and that was my cue to get up and let them sit down. Sometimes, if they had company or something especially important to talk about, I’d be instructed to “run on out yonder and play,” and I would dutifully do as I was told. But, most of the time, we would all be content to just sit there on that big front porch, watch the cars go by, and listen as the summer sunset brought every creepy-crawly in every tree in our front yard to life.

During the school year, on the days I would walk to and from school, my grandmother would stand on the front porch watching–waiting patiently. In the morning, she would see me off, “Have a good day at school,” she would say. Then she would stand and watch me walk down High Street until I went over the hill at the intersection of Houston Street and was out of sight. In the afternoons, she would stand and watch for my head to pop back up over the top of that hill, and then would wait for me to walk into the front yard and up on to the porch. “Well, did you have a good day at school,” she’d ask. After my almost-always-less-than-enthusiastic answer, she’d offer the weary student solace. “Are you hungry? Do you want a jelly sandwich?” A “jelly sandwich” was short hand for a peanut butter and jelly sandwich, and my answer was always “yes” and “yes.” After getting me settled with my afternoon snack, she and my aunt would go back out on the front porch to sit and watch the afternoon traffic pass as people headed home after work. On Friday nights during the fall, back when the old Person’s Memorial Stadium was still around, we would sit there on the porch and listen to the game–well, we weren’t really listening to the game. But, we could hear sound from the speakers and sometimes make out what the announcer was saying. And, we could certainly hear the roar of the crowd and the Fight Song every time the Fighting Indians made a touchdown. When I got old enough to go to those games, my grandmother and aunt would 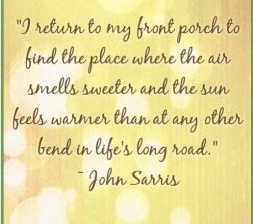 often still sit and listen, then ask me for a full report when I returned home.

When I was a little kid, my whole family gathered at Mammy and Sister’s house for Thanksgiving. I’m sure there weren’t more than fifteen or twenty people there at the most, but the house was almost busting at the seams. After dinner, while the older men would gather around the television to watch football and talk, the younger kids would head outside to eat our dessert and then play. The front porch was always “home base” no matter what game we were playing. It was especially good for Hide ‘n’ Go Seek because it was big enough for all of us to find safety from whomever was “it.” It was also a school room, an airplane, a spaceship, a Trailways bus (remind me to tell you sometime about my childhood desire to be a bus driver when I grew up). It was a bank, a post office, a hospital emergency room. It was often a stage where we performed original “plays” and Christmas pageants that we’d written ourselves as my Mom, grandmother and aunt would sit at the foot of the steps in the yard. The front porch was just about anything we could imagine possible. I remember once when we were young–VERY young–my sister and I decided to open a lemonade stand, and we convinced our aunt to make the lemonade because she made the best in the world. We didn’t make much money–okay, we didn’t make any–because instead of selling it at the street, we tried to sell it from the front porch where it was cooler. It was about 150 feet from the road, an impossible distance to read a sign made on a piece of cardboard and written with a ball point pen. Of all the things it was, our front porch was not a prime location to start a business.

During the springtime especially, the front porch was a pretty good weather station. When the afternoons grew sticky and still, my grandmother would step out on the porch and turn her eyes to the sky. “It sure is still out here,” she’d say in the most foreboding tone you could possibly imagine. Sometimes, if she’d heard from Harold Taft on Channel 5, or Warren Culberson and later Ron Jackson on Channel 4 that a thunderstorm was headed our way, she would stand at the edge of the porch and look to the west until she could see that it was “comin’ up a cloud.” We’d often sit, wait, watch, and listen until we could see lightning, hear the thunder rolling in the distance, and until the wind began to shake and bend those towering oak trees. If the storm wasn’t too bad, my aunt would often sit on the porch and enjoy the cool wind and the fresh smell and sound of the rain pattering on the roof of the porch cover. Then, if the storm rolled through early enough, I would sit with her and watch as the sky cleared from the west and the setting sun turned the sky a brilliant pink. Rain or shine, that front porch was an amazing place to see, hear, and feel nature all around.

That house and that front porch are long gone now. In fact, little remains that still looks as it did when I was growing up there. But, I can still see it all in my mind’s eye; and I can still hear the voices of my grandmother, my aunt, and all those wonderful people who spent time there. We weren’t the only front porch people in town, though. Back in those days, you could scarcely walk or drive down a single street in town without getting a big wave or a cheerful “how do you do?” from somebody enjoying the day on theirs. Even downtown, folks would sit in chairs in front of the businesses to “catch up” on the latest goings on in town and in the world. Most folks back then seemed to be the kind that wanted to be in a place to see what was happening. To hear events with their own ears. To greet their friends and neighbors with a smile, a wave, and a “how do you do?” They weren’t in the business of letting the world pass them by without giving themselves the chance to reach out and stop it, even if for just a moment. They were just that kind of people. They–we–were front porch people.